Vietnam population – among the top worldwide

Can you believe Vietnam population is among the top countries in the world?

Let’s make some comparison. Two other countries with more or less area, Finland has only about 5,4million population, and Malaysia has roughly 30 million.

Many inhabitants on small area result to high population density, which is 260 people per square kilometers in Vietnam, as of 2012. That figure nearly doubles that of China (140) and six times of worldwide average (48).

Frankly, those figures are not what I’m should be proud of, really? My country is just a developing but crowed country. Anyway, the figures show that we have a plentiful labor source and a considerable potential to do something for the planet, if we’re on the right track, which I hope we are.

Vietnamese concerned authorities have applied various methods to curb population growth. I still remember many propaganda slogans applied since I was a little boy, such as “Each family has only one to two children”, or “Cease at 2 children to raise them well”, etc.

Here’s a joking picture of such slogans, which implies a little funny trick of word playing if you can understand Vietnamese. The slogan sentence on the panel can be understood either: 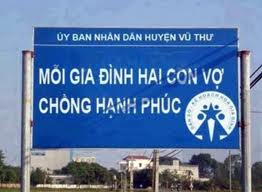 With population control policies including administrative punishment sometimes, Vietnamese authorities actively control the increase. But so far, there’re still many adverse affects, such as problems of unemployment, housing and environmental pollution due to crowded national population.

Maybe due to crowed population, my nation has a narrow land per capita. That’s why price of real estate is really exorbitant here. On Asian-wide average, price of house is about as many as 5-6 times of GDP per capita. Yet, in Vietnam, the ratio is over 20. Can you believe that we need over 20 years working consecutively to buy private accommodation? It’s a long time really.

So if foreigners want to buy a house in Vietnam, it may not be an economical option compared to other nations, though Vietnamese always welcome international guesses.

Do you think that Vietnam population is too crowded? How’s about your country’s? Share some of your thoughts here. We’d love to hear from you!

Finally, if you find useful information in this article, would you mind encouraging me with a Like button? I love your thumb up. Thank you very much!