Haiphong is my hometown, where I was born and grew up.

In this article I’ll show you all necessary information that a visitor needs to know when travelling in and around my city.

It’s pretty easy to travel to and around the third largest city, which is situated in the north and among the most important port cities in Vietnam.

You can take a bus (from stations: Luong Yen, Gia Lam, My Dinh, Giap Bat), or catch a train (from Hang Co, or Gia Lam stations), or hire a taxi, or even ride motorbike. I won’t suggest the final option due to traffic safety matter.

From Hochiminh City, you can go by airplane from the Tan Son Nhat Airport to the Cat Bi Airport. It takes about nearly 2 hours. Another alternative is going by train, or by long-route bus. Hoang Long has bus departure on daily basis, click here to See bus schedule.

Upon arriving in Haiphong airport or stations (by bus, train), which are within the city peripheral, you can get a taxi, or motorbike (xe ôm in Vietnamese) to go to your destination -- your hotel, for example. If you’re a foreigner or this is the first time to Haiphong Vietnam, I suggest you hiring a taxi, which is a safe and convenient choice.

Having stayed in your hotel, you can ask receptionists where to go, use which means of transport. As I know, you can get a cyclo (pedicabs), or a xe ôm to go around. They’re a cheap and highly accessible means, but be very careful about safety on motorbike.

There is city bus, but the service network is restricted. Thus locals prefer motorcycles to bus. I have been living here for long time, but just go by bus once or twice at most. 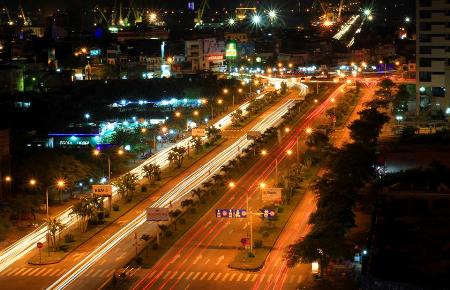 General security in Haiphong is fine. Anyway, strangers usually find awkward in a new place. Here’re some precautions you as a visitor should take when travel to Haiphong.

First, you should pay attention to traffic here, like anywhere else in Vietnam. I’m not talking about traffic jam, but about the chaotic surrounding on road. Probably, you’re not familiar with traffic situation where all transport means such as cars, trucks, motor bikes, bicycles, and sometimes walkers can move on the same road, or even worse, in same lane.

Secondly, be careful with taxi scams at the train and bus stations and the Cat Bi airport. Drivers do try to get you to pay more for their service, if you don’t know the way and are not willing to bargain toughly.

Perhaps, that’s enough for brief instruction and precaution. As your guide in my city, I’m a little eager to introduce you about landscapes in Haiphong.

Frankly, and regretfully to me, Haiphong is not a tourist city. Yet there’re still local attractions to introduce to you.

Haiphong is known as the city of Red flame flower because of color of the flower at the beginning of summer.

In May, the flower blossom and cover the city street with red color. Such kind of flower is also the symbol of school age, as students take final exam when the red flower blooms.

The flower season does not last long though, only from May to June. Saying this, I just think of the cherry blossom in Japan, though I haven’t gone there before. We don’t have cherry flowers, but we’re proud of the red flame flowers in summer. Come here in May and enjoy with us.

Swimmers can enjoy swimming in Do Son beach, which is about 20 km from Haiphong center (about half an hour going by motorbike).

Do Son beach has 3 areas with beautiful scenery, though the water is not very nice due to brown alluvium color. To tell the truth, I do not like sea color there because it does not look very clean and hygienic. I prefer to wander on the beach at weekend for fresh air, seafood, and a cold beer.

Recently, a big project of Hon Dau Resort has been taking place. That is an entertainment complex with houses and villas for rent, swimming pool, an artificial swimming beach, restaurants, and other recreation areas.

Near the resort, foreign visitors can play gamble at Do Son casino, which is almost unique because gambling is forbidden in Vietnam.

Golfers may like Do Son Seaside Golf Resort, which is closed to the beach. An 18-hole par-72 course combines sport and leisure within an impressive 6317 meter stretch of land.

Besides landscapes, Do Son is also famous nationwide for buffalo-fighting festival, which occurs once a year on the 9th August in lunar calendar.

Do Son has made headlines for many years for its prostitution, which is even known to foreign visitors. Authorities have applied many measures to settle this matter.

Cat Ba island belong to Cat Hai district, about 60 km away from Haiphong center. You can get there by hydrofoil boat from a terminal at Ben Binh or Do Son.

If going by car or motorbike from the city center, you go north-east towards Dinh Vu route, then take the ferry to Cat Hai Island, crossing that island, and then take another ferry to Cat Ba Island.

In term of location, Cat Ba Island is situated in the Halong bay complex and thus also possesses the beauty of the world heritage.

The island has beautiful beach Cat Co (numbered 1, 2, and 3). Cat Co beach curves along with mountain foot, has waves, fresh air, and so clear blue water that swimmers can see golden sand beneath.

Besides swimming in beaches, visitors can also take a trekking trip to Cat Ba National Park, which is the national reserve area with many animals in the Red List of Threatened Species like White-headed langur (Trachypithecus poliocephalus).

Visitors can enjoy fresh and delicious seafood at very reasonable price in Cat Ba also. Swimming, relaxing, and eating … all are great here.

The temple is several centuries old, used to act as communal house. There occurred many activities of local community such as: religious rituals, village festivals and celebrations, patriotic movements, or kids’ playing in the front and back yards.

What to eat in Haiphong?

First, seafood is good in the seaside city. Here, sea food is fresh, at reasonable price compared to other cities like Hanoi. In city center, you can go to seafood restaurants next to City Hall. Besides, Vu Lap restaurant stands out as a good choice. With about USD25-50 per person, you can enjoy many dishes with crabs, shrimps, squid… which are prepared in several methods including boiling, steaming, roasting, etc.

Second, red noodle is typical dish of Haiphong. We use it for breakfast. It tastes good, and also cheap (USD1 per bowl).

You can eat other Vietnamese foods, though they are not originated from Haiphong. To try various Vietnamese cuisines in one place, you can go to Quan Ngon at 393 To Hieu Street. There, many food, drinks, and desserts are from all three regions – north, central, and south of Vietnam.

If you dare to try Vietnamese dog meat or cat meat, great, you can go to Chien Truong on Lach Tray Street, Phi Truong on Le Hong Phong Street, or serial stalls on Pham Minh Duc Street. Try and tell me how you feel.

What about beer? Here, we have Haiphong fresh beer, right at factory on Lach Tray Street and many other retail locations elsewhere. If you prefer foreign fresh beer from Germany or Czech Republic, go to Big Man at No.7 Tran Hung Dao Street, or Goldmalt at No. 53 Lạch Tray.

Above is what I want to tell you about my hometown, I hope you like it. If you’ve come here, could you share some comments? If you are planning to come, contact me if you need any help from a real local. It’s always my pleasure.

By the way, if you find this article useful, would you mind click the Like button to encourage me? I’d love your thumb up!

Return to Home Page from Haiphong

Have your say about what you just read! Leave me a comment in the box below.
[?]Subscribe To This Site